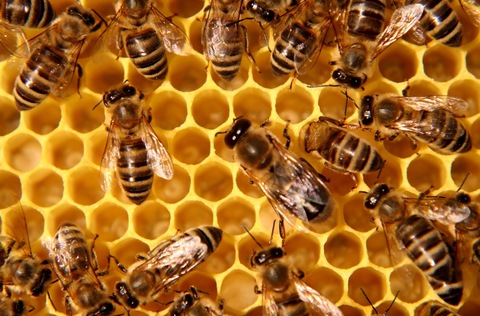 Many people with omnivorous eating habits understand the basics of vegan living, that most vegans don't eat or wear meat or animal products or by-products. Yet many of these same people are taken aback when a vegan explains that she won't eat honey. They don't understand why a vegan wouldn't eat honey. Here's why.

Vegans choose their particular lifestyle for multiple reasons. One of those reasons is to protect their health. Vegans have studied the findings of legitimate scientists and have discovered that eating animal protein is hazardous to one's health. Eating animal protein (whether it is found in meat, eggs, or dairy products) can be directly linked to multiple Western diseases (also known as "diseases of affluence"). Some of those diseases include cancer, diabetes mellitus, heart disease, and osteoporosis, to name a few. A great many vegans have chosen to eliminate all animal protein from their diets to gain these health benefits. Even vegetarians don't benefit from the health a vegan diet offers.

So where does honey fit in? Honey is an animal product, produced when bees digest nectar they have collected and then regurgitate it. It is an animal product, just like an egg or milk. Yes, a bee is an insect and not technically considered an animal by many people, but a bee's body changes the composition of what it ingests, just like other animals. According to Raw Food Explained.com, honey contains "animal ferments" as well as protein. If animal protein is harmful to one's health, then honey also falls under that category.

However, there is another reason vegans won't eat honey, and that is because it is harmful to another living creature. According to Daniel Hammer, bees do experience pain and suffering while they are being exploited for their products (not just honey but also beeswax, royal jelly, and more). There is simply no way beekeepers, humane or otherwise, can avoid harming or killing bees while they are extracting the bees' products. Many vegans choose their lifestyle because they wish to avoid harming any other creature, and so they choose not to eat honey.

Just as vegans won't eat honey, they also won't eat or use these products for the same reasons:

Vegans will continue to educate their omnivorous friends and relatives, hoping to avoid awkward situations when dining together or when accepting gifts. Refusing to eat honey may seem confusing to non-vegans at first, but when they understand the rationale behind a vegan's choices, people should have a better idea of why vegans avoid bee products and other products derived from animals or insects.

yeah, but vegans would eat salad and veg from the big supermarkets wich is full of poison and pestuzide, wich kills billions of bees and other insecs, poisoning the inviroment and destroying mother earth .. so don´t have a bad thought, when you go and eat a little organic honey .. this is no meat and no bee dies of that and it is defenetly healthy .. oh and besides: what about the trillions of insects you kill while walking arround in life, driving with cars or bus???? ..

Comment by sumito wu on August 10, 2014 at 11:23am
bro benjamin, there is a difference killing animals for food and killing them by mistake.
event when you just sitting and doing nothing but you are killing so many life beeing, at the time you are breathing, so many virus, bacteries or others invisible beeing died in your body without your realization. in this case you need wisdom and enlightenment.

Comment by sumito wu on August 10, 2014 at 11:29am
my I suggest you a link for free booklet "The Key of Immediate Enlightenment" by Supreme Marter Ching Hai as follow www.godsdirectcontact.com, www.suprememastertv.com

i got your point .. still to me it is like that: if you KNOW about pestizides in food, you shouldn´t buy it, shouldn´t support the producer, otherwise it is no mistake .. to me, it is much more important, to eat organic stuff (it is possible, i do so since 2 years now, combined being a veg), than not eating honey or rennet free cheese (as long as the mother can keep the calv .. same with milk) .. anyhow i think, that the food problem is the amount wich our insatiable society stuff into their big bellies without thinking .. . if everybody would eat once a month a little organic honey , i doupt that any bee needs to be harmed ..