So I haven't been to this site for quite a long time (around a month) due to lots of things: examinations, assignments, etc. I am on a semester break now, but I am actually typing this in the midst of my homework.

Much apologies to that.

1. For some reason I find myself being in an excess of energy after being almost vegan. I'm not 100% vegan for some factors: social convenience, a family which is not really open to new ideas (e.g. not using eggs for cakes, vegetables instead of eggs for protein etc.), being supervised while preparing dishes which are traditionally non-vegan (but happily, I managed to get away with making treats while nobody is around-sometimes)

2. I just finished my examination almost two weeks ago. I hope I can pass with flying colours!

3. I learnt that one can NEVER truly understand another person.

4. I only started to take up volleyball seriously during study week, which was late October despite studying volleyball for this semester. lol

Okay there are a lot more but I cannot remember everything. I'm a human too. So... back to the food pics!

NOVEMBER 6, 2014. Fruits and veggies salad for dinner... This is on a typical working day so it is very simple. Tasty nonetheless. 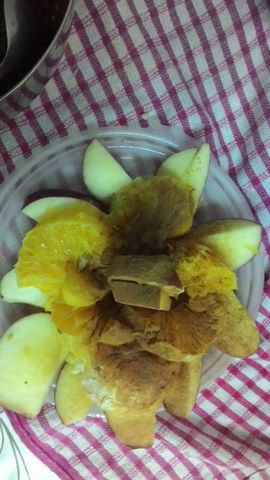 NOVEMBER 7, 2014. Since it's a Friday night, why not have a dessert to reward myself after a whole intense week of... well, studying? Here's a fruit platter with chocolate beverage as dip. It definitely does not compare to bona-fide fondue, but at least it's warm, sweet and good for me. 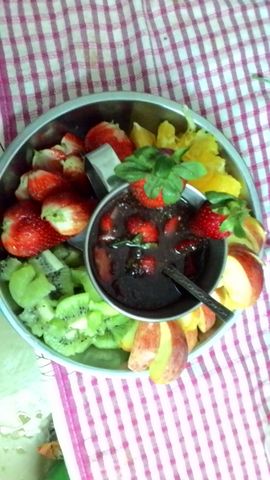 15 NOVEMBER 2014: The first week for exam is gone. I knew that I still had another two subjects but hey, RELAX FIRST! Here's my tangy fruit salad, veggies salad and (failed) carrot soup. 18 NOVEMBER 2014: One more day to the LAST SUBJECT. Here's what I got for lunch at the nearby cafeteria. I am totally spoilt for choice. 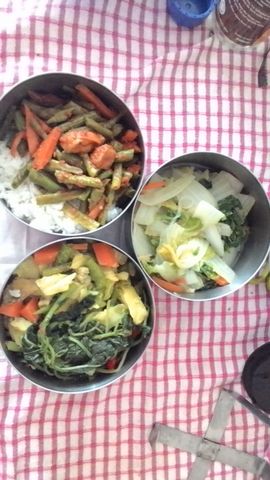 19 NOVEMBER 2014: CELEBRATORY LUNCH AFTER EXAM! I had this at Ideallite Wellness Restaurant, Queensbay Mall, Penang. It was not cheap, but I had trouble slowing down my eating speed to really savour every single morsel. Talk about refreshing deliciousness! 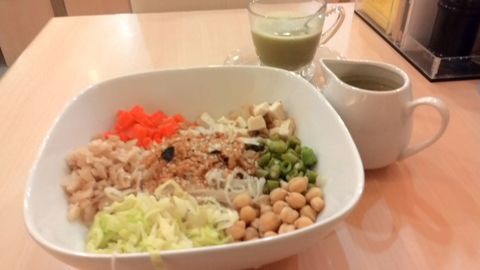 20 NOVEMBER 2014: This was my breakfast after an all-out sushi binge with friends for dinner. LOL (P/S: I ate only the vegetarian sushi like those in tofu pouches and cucumber sushi) Fruit dippers for dinner with sesame beverage as dip. YAY I LOVE MY FRUITS! THEY ARE BEAUTIFUL!

Verdict: I shall stick with chocolate dipping next time. 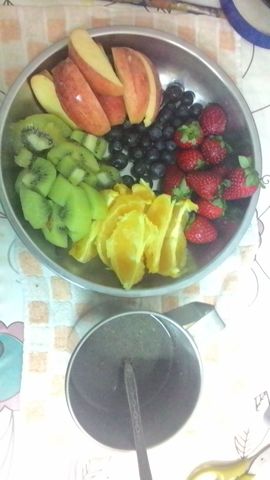 22 NOVEMBER 2014: Holidays! This is my first foodie project at home-soy-berry lollies! You just fill the popsicle mould with frozen berries, pour in soy milk, freeze and voila. 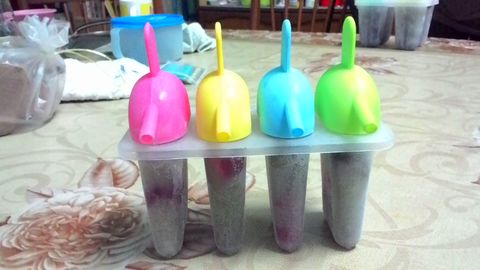 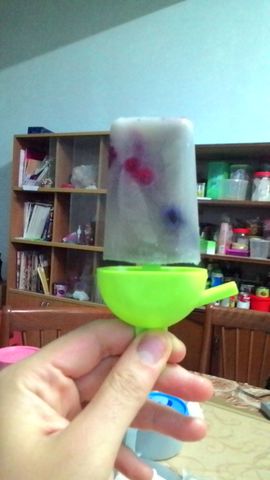 This treat is PERFECT for the Malaysian weather :D

26 NOVEMBER 2014: Lunch salad at home. I tried my first blended dressing using whatever available at home-orange, carrot, sesame oil, soy sauce, black pepper, tomato. The combination is odd but surprisingly delicious! It can be used to dip fried food too because its tang will neutralise the greasy sensation. Of course, there's nothing deep-fried in this salad. Duh. My HUGE breakfast! For some reason I got constipated despite eating lots of fruits and veggies (At least 5 fruits a day and I don't count my veggie servings) and drinking lots of water. I workout twice a day too. Mum told me to eat lots of fruits.

By the way, on the left are a whole Korean pear and two bananas with a dash of cinnamon; on the right are two oranges, a Packham pear and around 1/2 cup of mixed berries.

After this breakfast (Around 650 calories), I got hungry within half an hour. My past experiences told me that I do not do well on a meal with solely fruits. I need some nuts in there at least. Fruits are rich in fibre and water but cannot fill me up. WHY? As much as I love fruits, I will never eat such a meal again if not for my desperate efforts to alleviate constipation! I might have half of the fruits with some oats and nuts to last me for 5 hours at least.

Before I exercise, I made these no-bake cookies. These are my first cookies, entirely made by me. The caveat? It is ridiculously simple. I am too lazy to attempt stuffs which call for at least half hour for preparation. 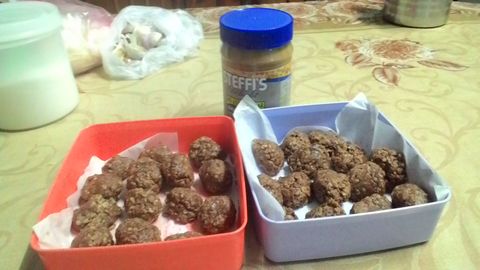 I used this recipe but I tweaked it after reading the comments, i.e. reducing the salt, adding chocolate chips, mixing brown sugar and white sugar and adding a pinch of salt. I was glad that my sister loved it! This was actually the ONLY stuff made by me which my sister would actually eat, mainly due to the peanut butter.

There was no such thing as vegan butter in my area, so I used the only butter available which was basically a mix of palm oil and milk fats. It was not that good to the environment, but there was no choice and it was definitely far cheaper than pure butter! I am guilty.

The cookies were sweet and chewy, but I might consider reducing some salt and the sugar. I finished 1/4 of the batch in one sitting. It was SO good that I could finish the entire batch if not for self-control (so-called). Try making this and stop at three.

I used around 1/3 to 1/2 of the recipe because the original yielded a HUGE batch. 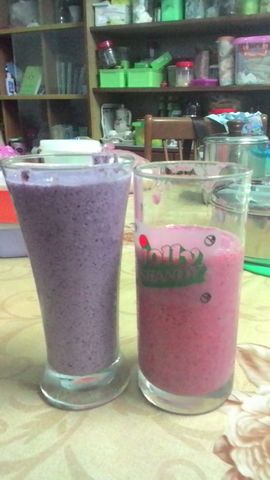 I never had a blueberry pie before but this smoothie was creamy and literally brought me to cake heaven. Oh yea, speaking of the smoothie, I actually used cashew milk which I made using this recipe. It fooled my dad into thinking that he was consuming dairy. I was really proud and grateful for the blog owner too.

So, that's all about my recent foodies! Oh before I forget, here are some extras... 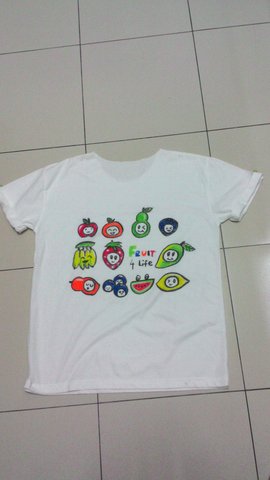 Here's a tee which I designed the illustrations. Mom modified the collar and sleeve. It's holiday! Let's make some greeting cards! I just used whatever I have at home, hence they look simple. I started following Blogilates too! The workouts are short, but don't be fooled by the short time frame! The blogger, Cassey Ho's exercises are definitely not for the faint-hearted. Oh yea, here's my first medal in life for running, which I got in October. I got fourth place for the Women's category of running-around-campus race (sorry for my terrible English). I was happy and grateful to win this considering the fact that I had not ran for three months due to leg injury.

Happy December everyone and enjoy your holidays!