The shortcomings of veganism

I am a lacto-vegetarian, which means I incorporate dairy products into my diet of grains, fruits and vegetables.  In India, this diet is traditional going back almost forever.  Cows and bulls and oxen are utilized for their own good and for their benefit to human society.  The main point here is that these gentle creatures are allowed to live out their natural life to the fullest extent.  Cows are good for the production of dairy products, which when used in moderation, are considered as miracle foods for humans which give long duration of life, optimum health and are also good for the production of finer brain tissue by which we can discern the actual aim of the human form, which as suggested by the standard Indian scriptures, is to develop love for the eternal divine Person, and to return to Him after giving up this mortal existence.  Bulls and oxen are utilized for labor such as plowing and hauling.  Utilizing cows, bulls and oxen is the basis of a culture of simple living and high thinking which offers the utmost in sustainable civilization.  When we use oxen and bulls for labor such as plowing and hauling, then we don't need hellish factories for the production of mechanical contraptions such as tractors and heavy trucks, nor do we need to go to war for oil. This symbiotic relationship of cows and mankind is natural and does not put any undue burden on man or beast.

While it is definitely true that animals are being exploited in modern culture, it doesn't mean that we have to throw out the baby with the bathwater in order to stop this inhuman interaction with animals.  Animals can be utilized for their natural abilities, while allowing them the full duration of their natural lives.  If someone wants to use the body of the cow for various purposes (leather, meat, etc.), then let such persons wait until the animal has died of natural causes (old age).  Cows and oxen which have outlived their usefulness (milk and labor) are still valuable as producers of dung which is a most valuable fertilizer.  If this one alteration to modern exploitative culture is adopted (no more animal slaughter), then there can be a peaceful and harmonious civilization.

We can't change eternal truth just for modern convenience.  The modern world is in a hellish condition because that is it's nature.  Bhagavad Gita says that from the highest planet down to the lowest, all are places of misery wherein repeated birth and death take place.  So it is obvious that this material world is not our real place of residence, just like jail is not our real place of residence.  Jail is miserable because if it was otherwise, then everybody would like to be there.  Yes, this is the picture I am trying to paint, because it is the picture of the spiritual world, which the Vrindavana in this world is supposed to represent.  Krishna is tending His wish fulfilling cows and is surrounded by the Gopis, and His flute playing is making the whole universe ecstatically joyful.

I have seen the videos about cow mistreatment and I am sick to my stomach to think these things go on in the same world that I live.  As for milk and dairy products, I am happy that now and then I can actually obtain what we call ahimsa milk, which is different from the blood milk of modern dairies.  Ahimsa milk is taken from cows who are protected from birth to death, who are treated as members of the family and who are allowed to live out the full duration of their lives.  The calves from these cows are allowed to live with their mothers and are given nursing rights, even while we take the surplus for our use.  The surplus bulls are castrated and are worked in the fields and for various labors.  This is a completely natural relationship.  There are some people in India who think castration unnecessary, as the bulls there can be utilized for labor as is.  Over here, though, we see bulls ready to knock over barns to get to females in heat.  Castration gentles them.

Just because modern civilization has everything topsy turvy, doesn't mean we have to quit utilizing animals altogether.  We just have to stop utilizing them for the wrong things.  To say there is no proper utilization for animals except to leave them completely alone is absurd.  How did people for millions of years get their Vit. B-12, if not from cow's milk?  Did we all used to go to the store for our pills, a thousand years ago?  Hello??? 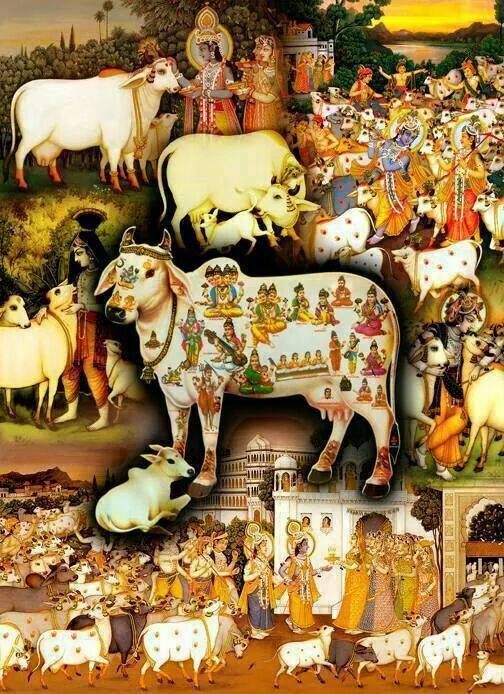