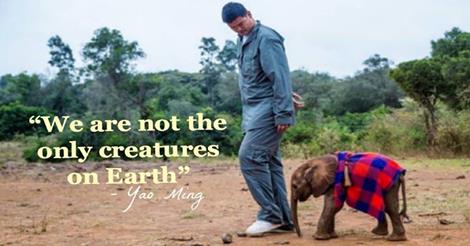 Yao Ming is a wonderful example of a celebrity who is using their fame to do good for animals. Ming retired from basketball in 2011 and has since taken on the cause of ending the illegal wildlife trade. I mean, if Ming could face off and dominate against some of the best players in the NBA (and the world, too) then facing opposition to ending the ivory and shark fin trade should be a piece of cake!

Most recently, Ming was present at an international Wildlife Trafficking Event in Beijing, along with U.S. Secretary of State, John Kerry. China and the United States are the two largest markets for illegal ivory in the world, so the meeting of the two nations is an essential step in ending this brutal trade.

In his address to the crowd, Kerry noted how pleased he was to see Ming present, poking a little fun at the star stating, “He is the small guy sitting up here in front.” However, it became clear from Kerry’s accolades of the basketball legend that his influence in the world of illegal wildlife trafficking is anything but little.

In addition to starring in PSAs discouraging the consumption of shark fin soup, a delicacy in China, Ming has travelled to Africa and seen first hand the dead bodies of slaughtered elephants, victims of the illegal ivory trade.

Ming is known for saying, “We are not the only creatures on Earth,” and his presence at this important dialogue certainly proves his beliefs to this end.

The illegal wildlife trade is a complex and multilateral solution that will require an incredible amount of attention and discussion to solve. Ming’s participation in the event will hopefully draw the attention of his fans, starting even more conversations and spreading the facts about the issue at hand.

Click here to read the full transcript of the event.