The weather is cooling and fall has crept in.  Usually it waits for Labor Day weekend. But not this year.  Even though it's sunny the mornings and evenings have been much cooler.  The peaches are done, I have the jars of sliced peaches, some dried and in the freezer, and then some just frozen and ready for smoothies or a quick cobbler in November. It was a tasty job. I've had peaches for dinner a couple nights this week. I'll be putting up tomatoes next, some this weekend and the rest next weekend.  The garden has been going pretty well too. The other night while watering I had a cucumber, a small ear of corn, and some peas for dinner. My kind of fast food, just wash and eat. I just love the availability of fresh food at harvest time.

I'm pretty happy with the peach cheesecake I made Tuesday night. This is almost an original recipe so I've got to write it down so I can make it again. The texture of the cheesecake filling was perfect. I call it "almost raw" because I baked a spelt flour and cardamom crust. It was crisp and crumbly all at the same time. I used a couple recipes I'd made before as a base. For the crust I began a Vegan Fusion recipe from a cheese cake in The Vegan Fusion World Cuisine.

I made a couple of changes to it which is highly encouraged in the Vegan Fusion cookbooks.  The filling I made up myself from experience making vegan cheesecakes.  It is really fun now that I can just create something without consulting a recipe sometimes.  I do have to write it down so I can make it again though.  This blog has come in very handy for that.

I made some vegan cream cheese ahead of time.  It's a very easy blend.

Blend all together until smooth in  a high speed blender or food processor.  Place mixture in a large mason jar or glass bowl and cover with saran wrap.  Place in a warm spot in your kitchen for 24-48 hours until the desired thickness.  This cheese will last in a covered container in your refrigerator for up to three weeks.

Sift together dry ingredients, blend wet ingredients in separate bowl.  Mix the wet into the dry and mix until crumbly and dough slightly sticks together.  Press into a 9" pie pan and bake at 350º for about 15-20 minutes until it just starts to brown and you can smell the cardamom and almond.  Take out of oven and allow to cool on a wire rack.

While the crust is cooling prepare the filling.

Blend all in the blender until smooth.

Pour into cooled pie crust and allow to cool for a couple hours.  After the cheesecake has set and thickened it's ready for the peach puré topping.

Pour onto cooled cheesecake and return to refrigerator to set.  Garnish with fresh peaches and toasted almonds. 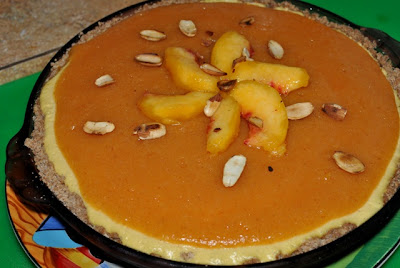 My husband liked it so much he thought I should make it for our Vegan/Vegetarian potluck tomorrow night.  Not a bad idea!

Raw vegan FTW. I'll give this a shot.