What are your views on shooter games?

Examples would be Halo, Call of Duty, and etc. They are basically video games found on Xbox 360, PS 3, and so on.

Mine did that too :)! They still do, haha. "Television these days! Movies these days!" Lol, but they have a good point. Oh man Freddy Krueger was the worst... he's the only villain that ever truthfully scared me.

I do understand your point, Merry. I very much agree with you. They don't care about us, or what content does to us- we have to be very careful and not just go along with the flow all of the time. They are always conditioning us into apathy- they want us entertained, dumb, and without weapons. I firmly believe that. That would at least explain our horrendous school policies.

Yes, much like the way we're conditioned to eat animal products from birth. We're taught to "just go along with it" and it takes real soul searching to break away from that way of thinking and take a stand.

Very true! I also love all the commercials which stereotype, or use fear mongering to get people to accept meat. "REAL men eat meat" "You need protein, meat is the best source of protein" "Animals are happy in our farms"- all that BS.

"Real soul searching"- I like that :)! It's dead-on. You have to be able to think critically and challenge what you've always been told as true. You have to get mad and stay mad about injustice, not be pacified into compliance.

Yes, just like Milk, It does a body good.  Give me a break! That campagine has been around at least one generation now so what else are young people to believe?

LOL! It's such a load, I hope they get sued again. I've met people who defend cigarettes, people will always defend their addictions, even despite their health. It' not until they get a disease or have a stroke that most people try and change, and then it's too late.

more restrictions sound good, but then people don't like restrictions normally and will rebel naturally.  gun laws in America are like that.  if you go in to purchase a gun, they want to see first that you don't have a criminal record.  I tried once.  I went to a gun shop and talked to him about getting a gun.  I was surprised that the background check was so thorough.  It made me impressed.  but then I shot one at the range.

ermm, sorry for the tangent on a gun story.  but I agree that games should be regulated.  but I don' t know how far it will go at all.

I don't let my kids play them. Why would I? 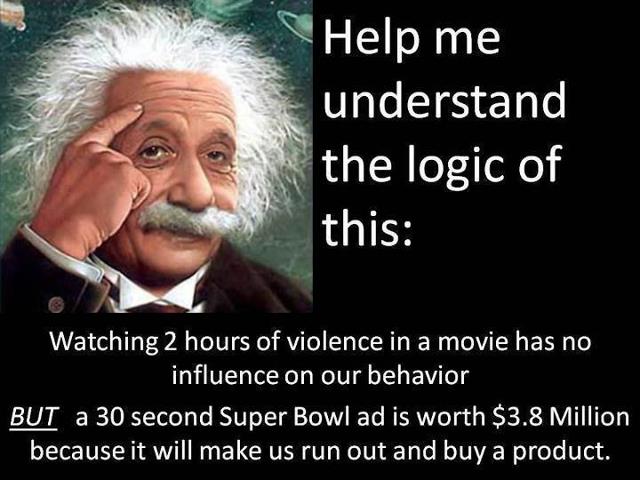 In very few words, this meme seems to sum up how I feel about the matter.

So if we can understand that movies with violence affect us in the same way that advertising and marketing does, then I think it is a no brainer that video games with guns will affect us.  Everything ultimately depends on how we take things, but that their is no influence is impossible.

.... and that assuming you're a perfectly healthy minded person :D

It's interesting reading all the different perspectives on this topic.

I can't help but notice though how many veg@ns seem to defend or seem to be proponents of the emulation of murder and other brutality, especially in the hands of children who are in many cases socially inept or maybe even just too immature to differentiate fantasy and reality. Children should be physically active, socially active and well-rounded in their lives. Too many kids who play these games do so for hours and hours on end. Why are we okay with our children fantasizing about murder, rape, theft and overall violence and how as Veg@ns do we expect them to partake in such activities on a regular basis but expect them to draw healthy, lifelong distinctions about kindness, compassion and the ethics needed to make a lifetime commitment to Veg@nism?

I understand there are exceptions and people who spend any amount of time partaking in such activities will defend their right to do so to the death (pardon the pun). I don't stand in judgment of anyone but I personally would never allow my kids to have their innocence robbed from them by playing such games (so someone else can make a buck) on the one hand while trying to teach them the importance of love, compassion, and the ethical treatment of other living creatures on the other. As parents I believe we have a moral responsibility to draw clear and distinct lines of what behavior is acceptable and what behavior is not. As the lines of morality and appropriateness get pushed further and further back and our kids become more and more desensitized how can anything good come from that? I would never condone such activity of my kids, especially during their innocent and most formative years and as an adult, I would never participate in such games and set that kind of example for them.

I think I read in this or another how many are perplexed about why people like Adam Lanza, Jared Laughner and James Holmes (all of whom spent extended hours per day in a dark room playing such games) do what they do. I think as a society we need to wake up and acknowledge the truth, even if it's inconvenient to do so.

I am also constantly amazed at this.

I think it goes back to the fact that everyone has different reasons for becoming Veg@n. For many people it’s a dietary or ethical debate, but there's a whole spiritual side of it that often gets overlooked. Being at one with nature, healing your body and mind from the inside out, releasing all things negative to make room for all things positive etc...