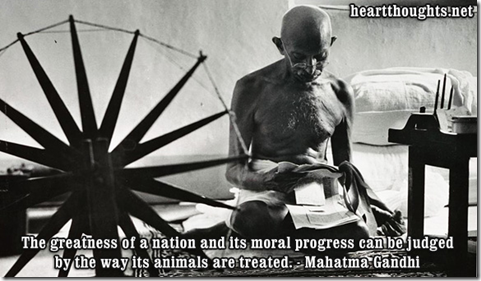 It is always fun to read quotes from vegetarians or about vegetarianism, so here is a look at a few vegetarian-related quotes from famous people that you might enjoy.  Some provide us with a good chance to laugh at ourselves, while others provide some food for thought (pun intended!).

Gerald Lieberman –"Vegetarian: A person who eats only side dishes"

Mahatma Gandhi — "The greatness of a nation and its moral progress can be judged by the way its animals are treated."

Mahatma Gandhi — "To my mind, the life of a lamb is no less precious than that of a human being."

Albert Einstein — "Our task must be to free ourselves . . . by widening our circle of compassion to embrace all living creatures and the whole of nature and its beauty."

Albert Einstein — "Nothing will benefit human health and increase chances of survival for life on earth as much as the evolution to a vegetarian diet."

(Author unknown) –"If vegetarians eat vegetables, what do humanitarians eat?"

William S. Gilbert –"Deer hunting would be fine sport, if only the deer had guns"

Jay Leno –"McDonalds announced it's considering a more humane way of slaughtering its animals. You know they fatten them up and then kill them. You know the same thing they do to their customers, isn't it?"

Romain Rolland — "To a man whose mind is free there is something even more intolerable in the sufferings of animals than in the sufferings of man. For with the latter it is at least admitted that suffering is evil and that the man who causes it is a criminal. But thousands of animals are uselessly butchered every day without a shadow of remorse. If any man were to refer to it, he would be thought ridiculous. And that is the unpardonable crime."

George Bernard Shaw — If a group of beings from another planet were to land on Earth — beings who considered themselves as superior to you as you feel yourself to be to other animals — would you concede them the rights over you that you assume over other animals?"

Alex Poulos –"I will not eat anything that walks, runs, skips, hops or crawls. God knows that I've crawled on occasion, and I'm glad that no one ate me."

I love the quote by Einstein :) xoxoxoxo

Einstein's quote has always been my favouritre too.

I like seeing that MANY great people in history both past and present are vegetarians/vegan.....i think that says a lot. ;]

i love all of this quote

CATCH UP!- VEGANISM is the only way to get Equality For All Creatures when talking about the Rights to Life.

Einstien has  A SEXY BRAIN!!!!

"The greatness of a nation and its moral progress can be judged by the way its animals are treated.

I love this soo much..After Einstein's

Alfonse de Lamartine : "You don't have a heart for children and another for animals, you have a heart or you don't !"Lamartine was a 18th century french philosopher

I love the quote by Leonardo da Vinci!!!

In Mein Kampf, Adolf Hitler warned that the actions of those who ‘rebel against the iron logic of nature’ are inevitably on a course to bring about ‘their own downfall’.